Skip to content
Spread the love
I drove to Rishikesh last autumn and I am glad I did. A mere five hour drive from Delhi, this quaint little town by the river Ganges is quite a jewel. Known primarily in the past as a pilgrimage destination for hindus, who consider the town holy, Rishikesh has in the last few decades also acquired a formidable reputation as a major adventure-sports center.

Of course there is no denying the fact that Rishikesh has a very devout, holy and mystical air about it with all its iconic ashrams, lining the banks of the holy Ganges. Seekers come from every part of India and the far corners of the world. People from different regions of India come here to offer special prayers on the ghats abutting the river to propitiate their ancestors. Apparently doing so in Rishikesh, carries a great deal of spiritual merit.

A very large number of foreign tourists descend on the town every winter. Mainly of the pale skinned variety, they come from all parts of Europe, America and Israel and you can see them loitering by the dozen in the lanes, by lanes and old markets of the town. They are mostly found in the many cafes that have sprung up along the river front, strumming a guitar, having a coffee and conversing earnestly among themselves. There is a very bohemian kind of a vibe at these cafes, and one is reminded of the fact that the Beatles had once come to Rishikesh, back in the 1960s. They had stayed at the ashram of the late spiritual guru Mahesh Yogi for several months, writing and composing some of their greatest music there

Many of the expats who visit Rishikesh do so to learn yoga. Indeed Rishikesh is the yoga capital of the world, with hundreds and hundreds of yoga and meditation centers that get thousands of Indians and foreigners acquainted with the finer nuances of the ancient practice. Indeed, many of those who get trained over here carry their skills to countries around the world where they often set up highly popular yoga centres. Many have gone on to become millionaires.

Among the highlights of one’s visit has to be one of the many artis that occur on the various famous ghats on both sides of the river at dusk. The most famous one has to be the one held at the famous Parmarth Ashram. Many world figures in the past have attended the spectacular arti. This includes Princes Charles and Camilla, among others!

I found the atmosphere at the arti I attended at the Parmarth Ashram to be an absolutely incredible experience. There were an equal number of foreigners and Indians present and as the bhajans being sung reached a crescendo, the crowd began to clap rhythmically and sway to the beat- like they were at a rock concert! Many of the devotees waved  big brass lamps, each one of them holding several lit wicks, in a circular motion, using both their hands to manouvere casting dancing shadows everywhere.  As the wicks burned with the help of oil it did require some skill to ensure that none of it spilled while the lamps were swirled around! It was almost hypnotic to watch the golden glow of the whirring lamps get reflected in the dark waters of the river, even as the lights went up in the buildings that dotted the nearby hill side, signalling that night was about to fall. The suspension bridge, a little up-stream too glowed from the light of the headlights of the  two-wheelers that drove  across the slightly quivering length of the structure every few minutes ( very brave of them to do that I thought!).

I spent a lot of time just walking up and down the river front taking in the sites. It was interesting to note how many young  Indians have taken to river rafting. Every few minutes I would notice a raft laden with youngsters paddle gently towards the banks of the river after coming down some exciting rapids down the 16 kilometer Shivpuri to Rishikesh river rafting stretch.  I believe that adventure tourism companies organize a lot of activities these days, including bungee jumping in and around that area. 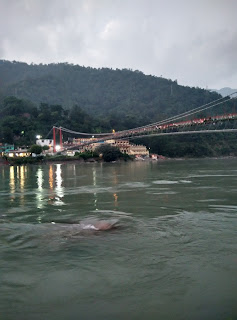 In Rishikesh one can get a reasonably priced accommodation near the river or if you prefer a quieter location you could check into a hotel in Tapowan which is located higher than the main town, on a spur of a nearby mountain. The prices may be a little higher, but not much.

That was where I stayed and I found it quite invigorating to take the short-cut down hill  to the main town by the river. It went along some quaint old world bazars and for a little while, a little channel of gurgling water rushing furiously downhill towards the river.

I drove back on the second day with lots of happy memories of the wonderful river side town of Rishikesh. If you happen to live in the Delhi-NCR region a weekend driving trip to will rejuvenate you like nothing else. Of course you could come from any part of the world and stay much longer- Rishikesh is the gateway to the great Gharwal Himalayas. 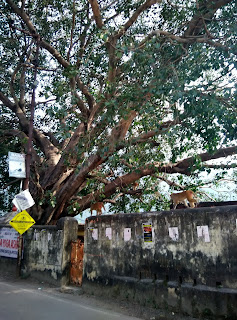 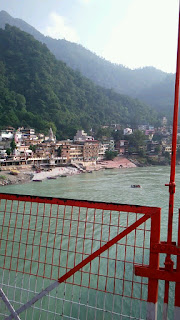